August 2010 - Women's Equality Day (of special interest for US Citizens) 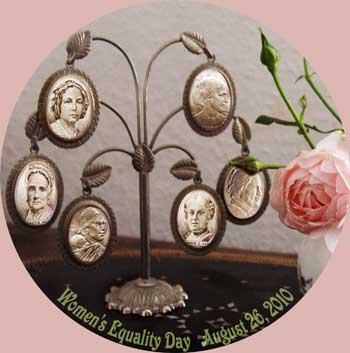 Every year when August 26 is nearing, I feel a tug at my heart. Women’s Equality Day was designated by a joint resolution of Congress in 1971 at the behest of Bella Abzug. It’s easy for me to remember the year because it’s when I moved back to Europe. Bella was right to insist on an official designation of this day: it means we can never forget the significance of the signing of the 19th Amendment to our Constitution in 1920 which gave women in the United States the right to vote.

To me, this day not only commemorates the contribution of the suffragettes and the ratification of the 19th Amendment, it reminds me of the wonderful women in my own family and all the women of all races, religion and cultures in the United States – past and present -- who have helped me become a woman, that is to say an equal member of society and a person with self-respect and confidence.

In an election year, August 26 also reminds me that it’s time to get ready to exercise my right to vote again. I study the candidates, check how they measure up on the issues important to me, and take my annual look at how equally women are represented in our government. Although still far less represented than men, it is encouraging that a record number of seats are held by women today. I’ll make an aside to mention age demographics as well. While visiting the Constitution Center in Philadelphia a few years ago, I was surprised to learn at how young our founding fathers were when they launched our country. Their average age was much younger than that of today’s Congressional representatives! In fact, Congress is now older than it ever has been.

Gender in the Senate:
17 are female
83 are male

Gender in the House of Representatives:
76 are female
363 are male

May Women’s Equality Day be a reminder to ALL of us to express our precious right to vote! Look up your candidates, see where they stand on the issues, make your choice and vote on November 2, 1010 -- whether you live at home or abroad!

Running Start http://www.runningstartonline.org/
A non-partisan organization that provides young women and girls with the skills and confidence they need to become the political leaders of tomorrow